I love getting news that some new and exciting beers are making their way to Hawaii. We all know it’s not easy getting certain brands or specialty beers to the state, so when we do get them, it’s a little extra special. Here are a few brand new beers and some returning favorites that are already on shelves or will be within the next month or so.

Birra Baladin Etrusca – From one of Italy’s premiere brewers comes an ancient ale fermented with a yeast 1500 year old yeast strain. Teo Musso of Baladin, Leonardo Di Vincenzo of Birra del Borgo and Sam Calagione of Dogfish Head in collaboration with the American archaeologist, Professor Patrick McGovern, director of the laboratory of molecular archeology ‘ University of Pennsylvania, set out to create a beer that possibly would have been consumed by the Etruscans more than 2500 years ago. Ingredients were selected according to findings made in different Italian archaeological sites. The three brewers created the base recipe, but each fermented the beer differently. Baladin with the use of a large oak barrel, Birra del Borgo in Jars and Dogfish Head in bronze.

In Baladin’s version hazelnut flour, fruits and pomegranate juice, honey, raisins, natural resin, gentian root were added. The brewers describe the final beer as being straw in color with intense and complex aromas of hazelnut, honey and wood.

Hoffstettner Old Hochzeitsbier – (brewery description) Original Hochzeitsbier von 1810″ goes back to the Original “Maerzen-style beer” that was served in 1810. Relative to today’s “adjusted” Octoberfestbiers it is much darker in color, much stronger in alc/vol, and much more full-bodied! Just the way beers were brewed around that time!

This beer is the end result of a lot of research by the head brewer at Hofstetten. We asked him to “throw out the rulebook” and the preconceived “definition” of Maerzen/Oktoberfestbier that Spaten set well after the royal wedding that established the tradition.

The small Austrian brewery was first mentioned in 1449 and is family-owned since 1847. The family’s great-great-grandfather, a cattle trader, took over when its former owner couldn’t pay their debts. In 1998 Peter Krammer inherited the company from his father. He now brews with his team of 9 employees around 5,550 hl of mostly unique interpretations of the classic Bock Bier Style.

Coronado Brewing Company Hibiscus IPA – (returning beer) Back by popular demand is Coronado and Maui Brewing Company’s floral IPA. This was a huge hit when it was last featured in Hawaii and we are getting more.

Deschutes Chasin Freshies – (brewery description) Like fresh powder, it’s a seize-the-moment thing. This year we’ve chased down Virgil Gamache Farms’ famed Amarillo hops. At harvest, we rush the hops from the vine to our kettles to ensure we capture the purest, juiciest essence of the hop flower in every beer. Enjoy the bright, bold aroma and flavor that comes but once a year. 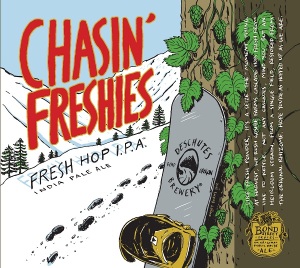 Deschutes Hop Trip – (returning beer) One of the best fresh hop beers available each year in Hawaii (Sierra Nevada Celebration being the other). Hops picked fresh from Doug Weather’s hop fields near Salem and used immediatly at the brewery.

Deschutes Green Monster – (extremely limited) This is probably the beer I’m most excited about getting my hands on. Deschutes does not regularly brew sour or funky beers and they almost never release them in bottles. Green Monster is a beer three years in the making that has been aged in Oregon pinot barrels and dosed with Brett. Sour, funky and sure to be an interesting beer. Hawaii is only getting a very limited amount of cases so if you want some better cozy up to your local bottle shop owner now. 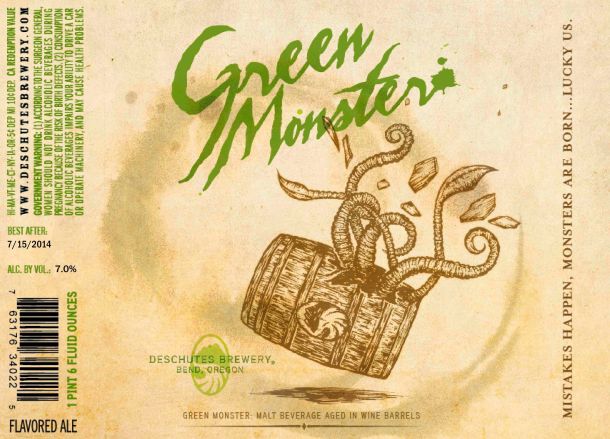 Deschutes Jubelale – (returning beer) Deschutes annual winter warmer beer should all ready be on the shelves and on draft in Hawaii. This year label art work is new. There should be plenty of inventory of this to last through our “winter”.

Sierra Nevada DevESTATEtion – (brewery description) It’s a shame when good barley goes bad. This spring, the combined effect of double digit sustained winds and concentrated rainfall created major stress on the normal course of our barley maturation — our crop went down for the count. Instead of crying in our beer—or lack thereof—we decided to do one better and make something new. Featuring organic malts and our estate-grown wet hops, this black IPA is the evil twin of our legendary Estate Ale. Black in color with a mild roasty flavor and moderate body, this beer has a bold citrusy and earthy hop flavor and aroma from the use of our own wet hops. We’d never let one bad harvest get in the way of a great beer, so join us in a toast to the memory of our devastating season.