Stone Brewing Company has always been damn good at marketing their beers and company. The  you’re not worthy branding brilliance has helped build them into international powerhouse. The foundation of the Stone brand really revolves around the long beloved Arrogant Bastard. This is a beer that sucker punched many into the craft movement (myself included) and it is still a huge fan favorite.

Arrogant Bastard is a brand unto itself and this summer Stone decided to let the wild gargoyle loose around the country with the Arrogant Bastard Hits The Road series of collaboration brews. Four breweries including Maine Brewing Co., Great Divide, Brew Dog and our very own Maui Brewing Company participated in brewing a batch of Arrogant Bastard at their breweries. 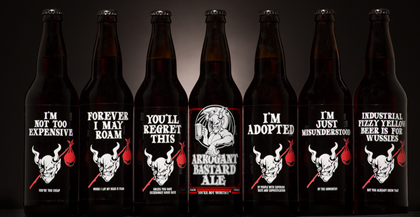 Stone has always been extremely protective of the Arrogant Bastard recipe, so allowing these four breweries to brew a batch is a big deal. The recipe brewed at Maui Brewing Co., was identical to the one brewed at Stone in San Diego and will be available on draft only within the next week. Freshly brewed Arrogant Bastard in Hawaii is something I could get used to!

Maui Brewing Company owner Garrett Marrero commented, “we’re stoked to have been chosen for this project, and of course as good friends we support Stone’s work as well.” The collaborative brew will also end up as a significant charity contribution with MBC donating $1/pint for making the beer PLUS $1/pint sold to visitors (so in essence its $2/pint).

This is a one time only brew and will only be available on Maui. Marrero explains, “our agreement prohibits any Bastard adopters from selling the beer outside of our brewery controlled locations so you’ll have to trek over to Maui for a taste of the Bastard.” A short puddle jump for some fresh Bastard might be worth it!