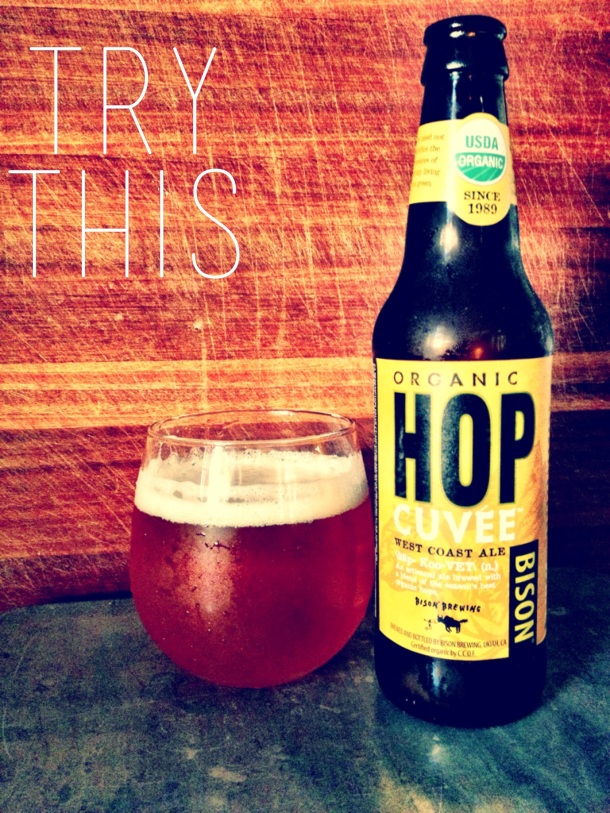 I’m a hop loving, IPA seeking, bitter beer fan. The problem I constantly run into is that most of the big hoppy beers I love also tend to be pretty high in alcohol and it’s hard for me to have more than 1 on a week night. With a full time job, a 3 year old and trying to keep up with this blog and other articles I tend to shy away from big beers on the week nights. So when someone suggested I try Bison Brewing’s Hop Cuvee, a 5.5% ABV hoppy pale ale, I was sold.

I’ve seen this beer before, but never bothered to check it out because the name threw me off. I saw Cuvee and thought it was some sort of hopped up Belgian style blend. After a closer looked I realized that this is actually an American Pale Ale style that Bison calls a West Coast Ale. Cuvee in this instance refers to the blend of organic hops the brewers used which include Citra, Simcoe and Centennial.

For only being a 5.5% beer, they really pack in the hops with a total of 50 IBUs. Right on the nose you’ll pick up some slight citrus notes and mild pine notes from the Simcoe hops. The malt really stays in the background in both aroma and flavor. The hops dominate this beer and there is a solid bitterness that lingers in your palate after each sip. The strong bitterness was followed by a crisp dry finish. This is definitely on the hoppier end of a pale ale and satisfied my craving for a good strong hop forward beer, but without the extra alcohol.