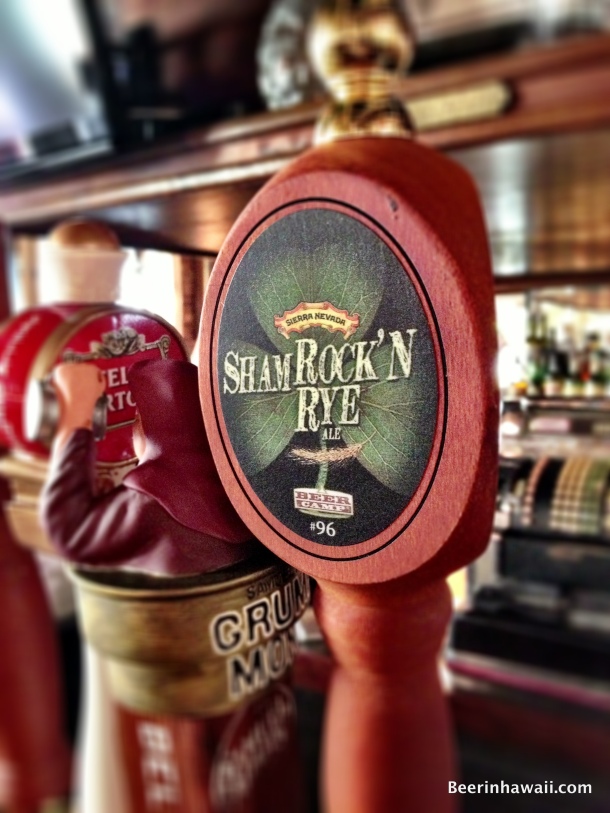 This past Monday a very special and limited beer from Sierra Nevada Brewing company was released at 2 Honolulu bars.  Shamrock N’ Rye is so rare that only a handful of bars around the country are getting it.  So how did Murphy’s and O’Toole’s manage to land 3 kegs of this hoppy rye focused Irish Red?

That would be thanks to Jonathan Schwalbenitz, bar manager at Murphy’s, and Joe Felix, bar manager at O’Toole’s, who actually participated in the brewing of Shamrock N’ Rye at Sierra Nevada Brewing in Chico, CA.  They were a part of the 96th Sierra Nevada Beer Camp that took place this past January and were the first ever to attend from Hawaii.  Call it luck or good fortune that Jonathan and Joe had developed a very close relationship with Hawaii’s Sierra Nevada manager, who suggested that the pair attend Beer Camp.

A group of 11 delegates from around the country descended upon Sierra Nevada’s headquarters in late January to craft a one of a kind beer.  The group played with the idea of creating a Black IPA, Scotch Ale and a Stout, but they eventually decided on brewing an Irish Red because the beer would be released around St. Patrick’s Day.  They decided to include about 6% rye which helps provide a hint of spice and pepperiness.  The group decided to balance the rye with touches of oat and wheat to help create a smooth finish.  After deciding on the type of beer the group worked with Sierra Nevada’s brewers to create a recipe and got to dive into the hop storage rooms to smell and sample all of the different hops available to them.  Joe said they loved the huge citrus qualities of the Southern Cross variety and thought it would provide a nice balance to the rye flavors.

With a recipe in hand and the Sierra brewers by their side it was time for the group to start brewing.  “We got to cut open the bags of grains, mill the grains, throw in the hops, pitch the yeast.  It was a very hands on process and a ton of fun,” Joe mentions.  The group only got to taste the final wort before the yeast was pitched.  After a fun filled 3 days at Sierra Nevada, which included tasting some rare beers, Jon and Joe headed back to Hawaii to wait for the final product.  Finally a month and a half later, the pair was able to taste their creation and share it with Honolulu craft beer fans.

You can still find Shamrock N’ Rye on tap at both O’Toole’s and Murphy’s, but don’t wait long to try it.  Another keg will also be featured at Real’s Sierra Nevada Total Tap Takeover this Tuesday.  But once these kegs are gone, your chance to taste this one of a kind, Hawaii influenced beer, will be gone as well.