Kohola Brewery rolled up their doors in late December to an eager audience on Maui and have been slowly expanding their draft accounts around the island. It’s a monumental task to open a brewery anywhere, but in Hawaii it can feel like trying to get to the moon. For co-owner and brew master, Justin Brouhard, the job of brewing the initial batches and getting a new brewery set up meant commuting from California to Maui. The frequent trips and constant communication were not easy, but with the help of newly hired brewer Andrew Brunson from West Sixth in Kentucky, the beers are flowing.

While fellow co-founders Ian Elumba and William Ramirez have permanently relocated to Maui, Brouhard and his wife still reside in California…for now. For now, the team is hyper diligent about communicating everything to each other. I caught up with Justin via email to learn more about his brewing style, how they came up with the initial recipes and his vision for Kohola Brewery.

How did you originally get into brewing?
We had close friends of the family that had been brewing for 10-15 years, to some extent I was raised around it. My interest in brewing started 8-10 years ago, but I would say I have been serious about it for about 5 years now. Brewing is such a great combination of art and science. It is an amazing craft to be a part of.

Did you always want to “go pro”?
Well, I had been offered several opportunities to help open and brew on the commercial scale prior to Koholā. I had never met individuals who cared enough about the craft to catch my interest. That being said, I think it is any brewer’s dream to take their beer and introduce it to the public on a larger scale and this was something that I had always hoped I would have the opportunity to do.

What convinced you to take the leap with this project?
The team’s appreciation for craft beer, what it is, and what it could be in the future. Brewing is a business and every business has to have a monetary focus to stay afloat. However, the Koholā team is truly focused on the creation of something special. They want to create beer that is “extraordinary.” This was what attracted me to them. In one of my first interactions with one of the founders, he told me that he would not serve a bad beer to the public. He told me he would rather pour it down the drain than put the companies’ name behind it. This was inspiring to me.

What type of beers do you like to brew? What will Kohola be known for?
I enjoy brewing all styles of beer, but I am most passionate about dark beer styles such as stouts and porters. That being said, Koholā will be known for producing the finest quality beers of any style, and not just those that are simple or cost effective to make. I am sure you’ve noticed that we opened with two clean lagers which require extensive time to ferment, mature, and hide no off-flavors due to the clean, crisp nature of the style.

You’re currently still living in California, how does that work with owning a brewery in Hawaii and being the head brewer?
It has been challenging to say the least. My wife Brittany and I were flying up to Maui every couple of weeks to work and piece together the new space. We brewed most of the initial beers Koholā opened up with, prior to hiring Andrew Brunson to help us. Managing brewery operations and the decisions for the brewery side is a process that involves extensive communication between Andrew and the other co-founders. However, we have developed a standard set of operating procedures and recipes to be followed and this allows us to put our dream into reality. Expect to see Brittany and I in Maui in the near future!

Tell me about the first beers Kohola is offering? How did you or the team come up with the recipes?
At the moment, all the brewing procedures and recipes are my own, with the exception of the popular American rye IPA which was designed by my wife, Brittany. They have been brewed up to 15 barrels, however a 25 barrel system is a new test for them. The beer was designed to be clean, drinkable, and tailored to the beautiful Maui environment. We knew we needed a couple of crisp, easy drinking beers and this is how the Lani and Lokahi lagers came into the mix. There is nothing more refreshing than a clean German Pilsner or American Lager. Every brewery should have beers tailored to those hoppy beer lovers, thus the Talk Story American pale ale and 88 “light” American rye IPA were born. We created the Ales Man American porter for those who appreciate dark beer and we put it on Nitro to give it more body, head retention, and a smooth, velvety texture. These beers are only the start of what is to come. I want to perfect a few flagship recipes before we become too adventurous. However, expect to see our Imperial rye IPA, a hoppier American pale ale, and a few specialty beers coming in the next 2-3 months! 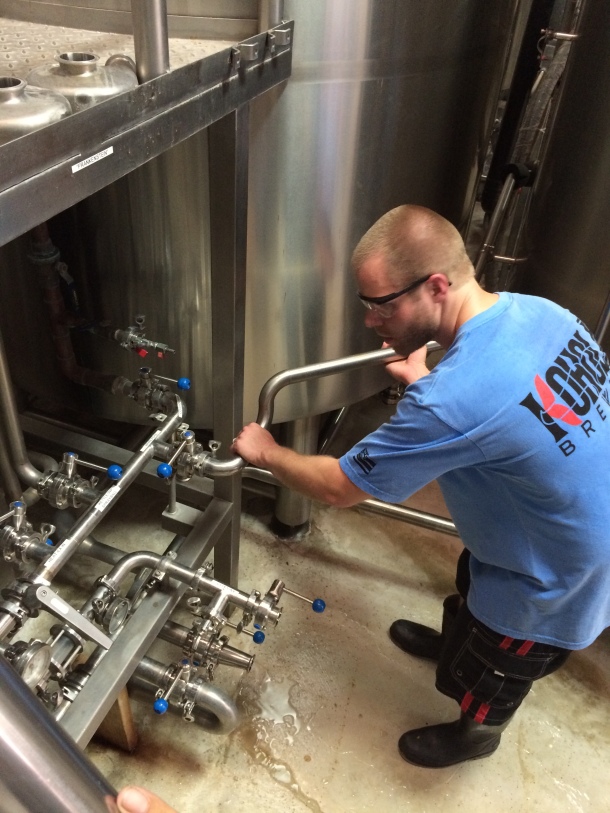 What was it like taking over the old Maui Brewing facility?
I think I speak for the group in saying, it was a daunting task. We had to replace much of equipment to meet the standards that we set for the brewery. I wouldn’t say that I added anything “unique” per say. I tend to be quite attentive to detail when it comes to brewing procedures. I made sure we had good procedures for quality control/assurance and a brewer who had some experience maintaining those standards. Andrew has done a great job with this. I was adamant about having the brewhouse work correctly with respect to managing the various processes (e.g. having flowmeters to track sparging/lautering rates and variable frequency drive pumps to control flow). This allows us to dial in the recipes and create good quality, consistent beer for our customers.

As the head brewer, what are your goals for Kohola?
My goals go along with the goals and motto of our company, and that is to create extraordinary, local craft beer for all to enjoy! I would like to bring more focus to barrel-aged light and dark beer, lower ABV/session sours, and various lager styles with an island twist. Andrew’s knowledge is a good complement to my own, and together we will bring new and exciting beers to the islands.