Beer Lab HI will become Oahu’s seventh brewery when it opens its doors on Wednesday and beer fans are excited. The “soft opening” will have limited hours (4pm to 10pm), Wednesday through Saturday, and feature 4-5 beers.

The team at Beer Lab HI has been furiously brewing batches over the past couple of weeks to have a nice selection of beers for opening. They are planning on a larger grand opening in a few weeks, but until then, you can pop in to try their beers and hang out in the tasting room. The former Bank of Hawaii space has been transformed into a dark and cozy drinking hall with multiple communal tables and plenty of space for enjoying a few pints. BYO Food will be in full effect and they suggest you check out some of the nearby restaurants if you’re hungry. They will be offering furikake popcorn with coconut oil for $1 for those who want to munch on something with their beers.

Speaking of beers, here’s what you can expect for opening night at Beer Lab HI. For those waiting and dying to try some of the much anticipated 100% Brett beers, you’ll have to wait until next week.

Porter with 100% Maui coffee – 5.3% 31 IBU. A robust porter a bit on the lighter side. Smooth Maui coffee was chosen to gently compliment the chocolate notes of this porter.

Session Brown – 4.3 % 20 IBU. Not a typical light beer at 4.3% abc. Loaded with specialty malts and brown sugar to give the taste of something bigger.

Upcoming (3/9)
The Truth & The Imposter – 5.5% 27 IBU. Two identical beers, but fermented with different yeasts! Bright and tropical Citra and Galaxy hops are used to compliment the intensely fruitiness from the yeast. One beer uses a true brettanomyces strain for fermentation, while the other a saccharomyces strain that was once classified as Brett. Can you spot the imposter?

IPA – 7.1% 68 IBU. A bright and dry IPA brewed how it should be, all about the hops! Malts take a back seat while the juicy aroma and flavors are provided by Mosaic, Simcoe, and Citra hops! 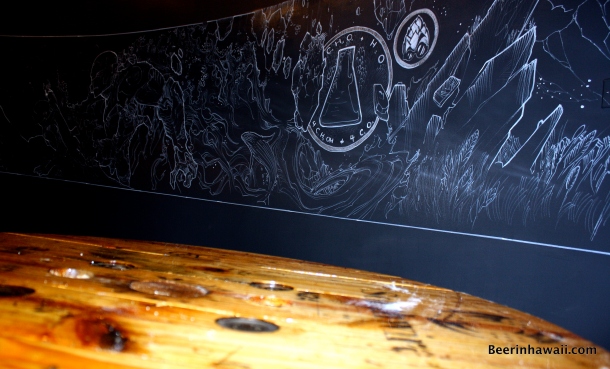 At the entrance you can’t miss the huge hand drawn mural by Honolulu native Peter Nguyen, who has worked for Marvel and DC Comics. As you make you’re way to the back you’ll get a full view of the brewery and equipment.