Wow, I feel like every other week for almost the entire year I’ve been writing a post about a new brewery coming to Hawaii. The Oregon invasion continues with news that the highly awarded Pelican Brewing Company from Pacific City, Oregon, has just picked up distribution in Hawaii. Pelican runs one of the most picturesque pubs in the country on the Oregon Coast and has a cult following in the Pacific Northwest.

It’s been an amazing year for beer in Hawaii and it looks like the run will continue into 2014. Here are the beers you can expect from Pelican in 2015. 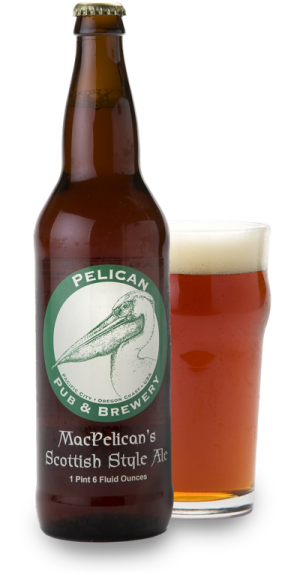 Our interpretation of the Scottish Export style is coppery amber in color and features a mild, malty aroma. The malty flavor is balanced with Willamette hops to add a little “snap” to the flavor and finish of this rich, smooth ale.
Style: Scottish-Style Export Ale
Gravity: 13 degrees Plato
ABV: 5.0%
Bitterness: 16 IBU
Color: Copper

It’ll bowl you over with its midnight black color and rich dark-roasted aroma. Magnum and Willamette hops combine with unmalted barley and roasted malts to give this brew a full body and a dense creamy head. All elements combine in a rich espresso-like finish.
Style: Foreign-Style Stout
Gravity: 17.0 degrees Plato
ABV: 7%
Bitterness: 45 IBU
Color: Jet Black

Our mascot, Phil the Pelican, has recreated the flavor of the British Empire with his own American twist. Enjoy the huge Cascade and Centennial hop aroma, the subtle malty sweetness, and the floral, citrusy flavor of this robust, gold colored ale. This brew began life as a seasonal beer during our first year and was so popular while we had it, and so frequently requested when it was gone, that we turned it into our fifth regular beer style our second year.
Style: American-Style IPA
Gravity: 17 degrees Plato
ABV: 8%
Bitterness: 85 IBU
Color: Gold

Just as red lanterns were once used to guide fishing boats to home base at the end of the day during foggy winter weather, our Red Lantern IPA is the perfect way to end your winter day. Born from our brewer’s love of hops and craving for a deep caramel backbone, the rich red color and medium body delivers just the right balance. Copious amounts of El Dorado hops give Red Lantern a clean hoppy finish.
Style: American Red IPA
Gravity: 14.6 degrees Plato
ABV: 6.4%
Bitterness: 60 IBU
Color: Deep Red

Mother of all Storms

There are many storms out there, all of them perfect in their own way. But there is only one Mother of all Storms and it only happens in Pacific City, Oregon. Based on Stormwatcher’s Winterfest, our English-style barleywine, Mother of all Storms spent many months aging in Kentucky bourbon barrels. Now at its peak, Mother of all Storms delivers deep flavors of toasted malt, bourbon and oak. The finish rewards with whispers of vanilla, toffee and caramel. Best enjoyed with gusts exceeding 60 mph.
Style: Bourbon Barrel-Aged English-Style Barley Wine
Gravity: 31.7 degrees Plato
ABV: 14%
Bitterness: 40 IBU
Color: Deep Red-Brown

One thought on “Pelican Brewing Company Coming To Hawaii”