The beer scene on Maui has been making people on Oahu jealous for a while now. They have the amazing Maui Brewing Company at their fingertips and just last year got exclusive access to dozens of amazing brands via Maui Stone Craft Beverages. With all of the great craft beer on the island, there has been a lack of beer focused bars like we have on Oahu. That’s slowly starting the change. Rock & Brews opened in Paia last year and now with the opening of What Ales You locals and tourist have a craft beer bar in Kihei have something in their hood.

Oregon native Derek Braun is bringing a piece of home with him to the Kihei triangle and taking advantage of all of the new great beers available on the island. The “triangle” is a strip (not actually a triangle) in Kihei that is dominated with bars, clubs and restaurants that has always been known for it’s nightlife. What Ales You is bringing a bit more of a laid back and relax vibe to the scene focusing on serving only craft beer and great wines. 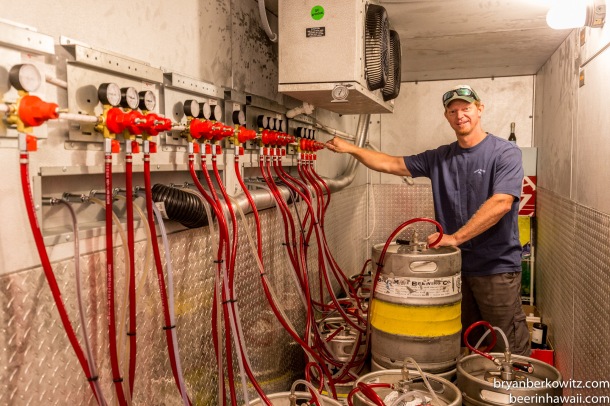 Tell us a little about What Ales You?
We’re a craft beer tap house with 16 taps, great wine and food.

With our 16 taps, we’ve got 8 that we probably will keep around kind of as our core, but we realize a lot of people come in for those specific beers. So the other 8 we’ll try to be pretty aggressive and rotate to give people a different taste. We’ve also got some really good wines. You can go from a $6 glass all the way to a $17 glass, which I thought there was no way would work in the triangle. We’ve got a wine called Sexual Chocolate that’s $14 a glass and we probably go through 2 bottles of that a night. So there’s definitely a little bit more of a higher end crowd coming in and it’s been real positive so far.

Coming from Portland Oregon, there’s just a huge wave of these tap houses opening over there, with a different kind of business concept where it’s beer and wine first, and then the menu and food options third. Typically the business model that a lot of people in the Northwest are using, they don’t have a menu, you come in, get a beer or wine and if you want something to eat they’ll give you a bag of pretzels. 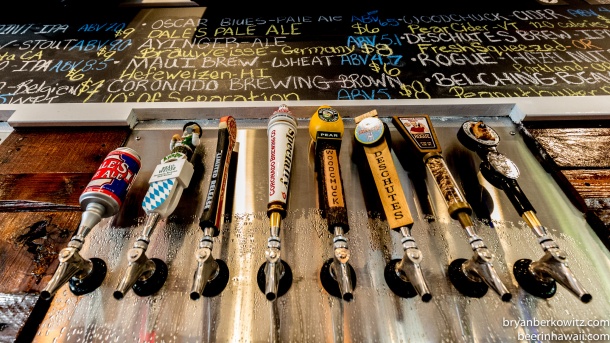 But because we’re here in the triangle and there’s so much foot traffic we figured we needed to offer something above a pretzel or chips. Part of the challenge with this particular location is there was a conflict clause in our contract that we couldn’t do anything that the other restaurants were cooking. So we were stumped for a while trying to figure out what we could do. We couldn’t do pizza obviously pizza, tacos, fish and chips, irish stew among other things. It made it a little difficult, but then I saw a restaurant in Seattle that specialized in bratwursts and they called it the Wurst Bar. So I thought no one’s doing brats, it’s a great kind of beer and brats, they go together perfectly. We get all of our brats fresh from whole foods and pay a little bit more for them, but they’re nitrate free, organic, free range, certified, all the bells and whistles people look for when they’re buying a good high end protein. 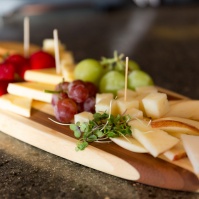 We parboil them in beer with onions and garlic and then grill them on a flattop to order. All of our toppings are from Life Foods, a local company here. We have a sun dried tamarindo ketchup, a stone ground turmeric mustard and a fennel onion mayonnaise. We also have a Life Foods kim chee and sauerkraut. Of course with brats you gotta have a good sauerkraut. Then we have a house made hot sauce called Uncle’s Lilikoi Hot Sauce. Our brats seasonal, but we try to always have a pork, spicy pork, chicken and Italian spicy chicken. We’ve got a chef from Fleetwoods and another guy that comes in 2 days a week from Matteos. So we get some good guys back there. The whole staff has been tremendous.

What kind of special events or happy hours are you running?
Yeah, we’ve got an all day happy hour for kamaaina. You get $1 off any beer and any wine all day long. Also from 12pm – 3pm we have a liquid lunch special. $2 off any beer and we have a $6 brat with any of the toppings. Because we have a little bit of a higher end wine, we’re gonna do wine tastings out on the lanai. So you do a $15 buy in, you get to taste and sample different wines and then you get cheese to accompany the different wines. No one’s doing that kind of stuff in the triangle. At night we have all the tiki torches and candles lit, so you get a really good lounge feel out here. 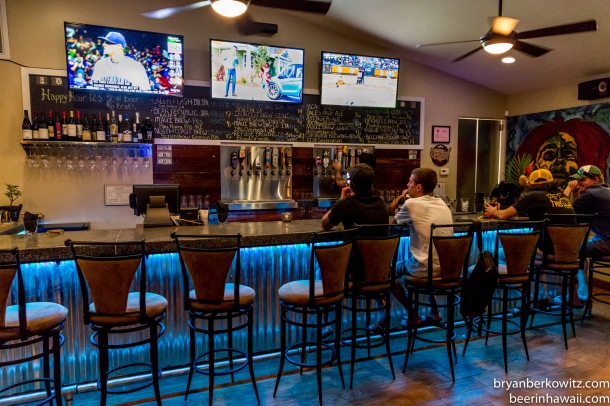 Did you have the concept or location first?
Concept first. It took 2 years to find a location. The triangle is tough to get into and when we originally started the landlord was hell bent against having another bar in the triangle. The triangle has a certain reputation, but the nice thing is that when we actually approached them with our business model and explained that this is completely different. We don’t have Heineken and PBR. We don’t really get the guys that sit and just power drink, which is good.

Do you get people that pop in and look at the menu and say what?
Oh yeah, “you don’t have Heineken? See ya later.” There are plenty of other places around here in the triangle that are doing that. One of the things that the landlord didn’t want to have happen in this location was another bar with hard alcohol. Another 2AM type of place. So we actually close at 10PM. Last call is at 10, but if you have a nice glass of wine you can sit and enjoy it. We’re not going to rush you out. So we actually probably stay open until about 11. 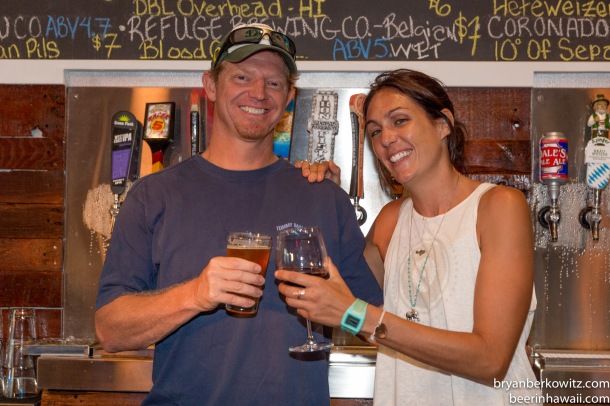 What’s your background and where are you originally from?
I moved to Maui a little over 4 years ago from Portland to work in the hotel industry. I went to high school in Bend, Oregon, which is where Deschutes is. Then went to college at Chico State, which is where Sierra Nevada is. I’ve always had an affinity for good beers and then I came here and thought if I have to have another Kona Longboard Lager again I’m gonna kill myself. I just got burned on the whole corporate thing and I thought now is my time. When this place opened up they were gonna put a noodle house here and someone else wanted to make it a nail salon. Unfortunately for me, I was 4th on the list and kind of wrote it all off. I went back to a suit and tie working in Wailea. Somehow all the people in front of me couldn’t get the place, so 2 months later after I already had given up on the dream and started looking at more properties, I got the phone call from Jeff, and he said if you still want it you got it.

What kind of beers are you into right now?
I just started getting into the sours. Cascade from my neck of the woods up in Portland makes an apricot and a blackberry sour. I couldn’t understand sour beers when i first tried them. I thought they would be really good on a salad, you know, they almost have a balsamic taste to them. But a friend of mine took me up to Monkeypod, we got a few in snifters, sipped on them slow and it just grew on me. I’d really like to get some sours in here as bottles. Also into some of the saisons, you know the farmhouse ales. But yeah those are my favorite and obviously the fallback anytime is IPA. I love the hoppiness.

Do you have a favorite beer?
I’m a huge fan of Bear Republic’s Racer 5. I’d love to get Ninkasi here, from Eugene, but hawaii’s a tough market to break into. I will say one of the nice things that with Maui Stone, they started doing the cold container shipping from the mainland. They kinda set me up. They’ve got like 30 micro brews in their portfolio and because there’s not a lot of tap houses, you can almost have exclusives.

Any Cicerones on staff?
Nothing right now. I would love to do something like that once we get running. I would love to sponsor and pay for any employees that want to do something like that. Training wise, a lot of its been on the reps from the different distributors. We have our staff come down in the morning, an hour early, and we’ll just do a full on cram session with new beers or new wines that we have. So that’s the best part – having a great relationship with our reps. The reps love to come in and educate the staff. A lot of our staff has worked on the mainland at tap houses, so they already are pretty knowledgable about Belgians, the different between a lager and an ale, an IPA, a pilsner, etc.

What is your long term vision for What Ales You?
If this does well, I would love to get something on the West side because they’re starving over there. I have people that drive over from the West side just to come have good beers here. And our prices are right.

Are you dog friendly?
Oh yeah, dog friendly, forgot to mention that. We’ve got water bowls, milk bones, and you know we’ll set ‘em up real good. Of course it’s case by case, you kind of have to. In Portland they’re so super liberal with their beers and their dog policies and we kind of wanted to inherit a little bit of that. There are so many dog lovers here, and we’ve got the outdoors lanai.

Plans to ever do mixed drinks?
Nope, nothing right now. We’ve talked about doing some kombucha. Wine reps want to do a wine by the tap type thing, but we have 16 taps right now. I think we could do some more taps, but that’ll be down the road hopefully as we progress and move forward.

With the new growler law passing in Hawaii, do you have plans to fill growlers?
We plan on having our own growlers with logos as well as Hydroflasks. We’re about a month away from getting these. In the meantime we have growlers with no logos for $10 and we fill 64oz growlers for $20 with the exception of our $9 pints. Those are $25. I was talking to one of the concierge at the Grand Wailea and a 6 pack of Budweiser is almost $30 after tax there. They kinda got you there, so we hope to attract some of those guests to fill up growlers and take them back to their rooms. We’re even talking about doing a buy back program. So if you came down here, got a growler and don’t want to take it on the plane, or put it in your rollaway, we’ll just buy it back.

3 thoughts on “Interview: What Ales You Owner Derek Braun”