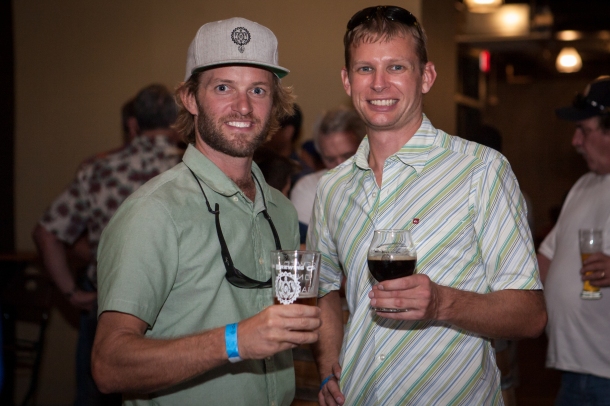 Hawaii’s beer scene has exploded in 2014 with dozens of new breweries gaining distribution. One of the most anticipated beer events of the year was the opening of Maui Stone Craft Beverages. The joint venture between Stone Brewing Company and Maui Brewing Company promises to bring over 20 of the most sought after beer brands to Hawaii and is finally up and running on Maui. I got a chance to catch up with Zach Nowicki and Andrew Tralka from the MSCB team to find out what we can expect from the new distribution company and when Oahu may see these beers.

Where are you from originally and how did you end up in Maui?
Andrew Tralka: I grew up in a small coastal town in New Jersey. I moved to Maui five years ago from the San Juan Islands off Seattle. I was living seasonally between the San Juans and San Diego. My wife, a marine biologist, received a job offer working with the humpback whales so I was dragged out to Maui with my golf clubs and surfboards. Kicking and screaming, as you could imagine.
Zach Nowicki: I’m from the Midwest originally and ended up in Denver. After my wife and I were married in June of 2012 we decided to pursue our shared passion of world travel so we quite our jobs and hit the road. After 15 months of traveling we began looking for our next move. I had read about Stone’s move to Maui and was lucky enough to become a part of the team.

How’d you get into craft beer?
Andrew: I really got into craft beer living in the Pacific Northwest. I started homebrewing in 2006 and soon enough was brewing on a 7bbl system for San Juan Brewing Co in Friday Harbor. I saw the passion, craft, and creativity behind the industry, and was immediately hooked. I even took it to the next level and started Farm To Pint, a one acre hop yard on the North Fork of Long Island. I have been running that in the summer months till harvest time and living on Maui in the winter months for the past 3 years. The hop yard has given me a whole new appreciation to what goes into beer, as well as an opportunity to “grow” in the craft beer industry.
Zach: Uhh, can’t top Andrew’s response. I basically just starting drinking craft beer about 15 years ago and have been hooked since!

What is your role with MSCB?
Andrew: My official title is Sales Rep. I like to think of my job more as an “ambassador” of craft beer rather than a sales job. My favorite part of my job is to share my passion for the industry through education. Seeing people taste and enjoy a “real” beer is where I have the most fun.
Zach: As Garrett from Maui Brewing Co. likes to say I am the MOM, or Maui Operations Manager. Being we are a small operation at this point I’m in charge of everything from the deliveries and ordering containers to cleaning the floors. Some glorious, some not so much! There were a few delays in the launch of this company.

What were some of the major challenges and hurdles in getting this operation up and running?
Zach: A few delays is putting it lightly! From an operational standpoint we were ready to rock by late spring but the county had numerous concerns in regards to issuing clearances we needed to secure our liquor license. Without getting myself in trouble I’ll just say our tax dollars are supporting a healthy number of governmental departments.

Number one question everyone asks, what about Oahu? Is it in your plans to expand to Oahu and the other counties? If so, what needs to happen and when?
Zach: Yes, it has always been part of the plan to expand onto Oahu. We learned a lot from opening this facility and for all the hardships we will be that much more prepared for when we make the move. I don’t think it’s so much what needs to happen first as much as just getting ourselves settled into Maui before looking at setting up operations in Oahu.

How big is the warehouse and how much beer can it hold?
Zach: Our warehouse itself is 16,000 sq ft with a 4,500 sq ft cold box. When it was empty I couldn’t imagine ever filling it up. Now after two containers from the mainland and a couple from Maui Brewing I’m wondering how I can set it up to get more space.

Can you describe/explain how the relationship with Stone works? Will you have access to all of the beers and breweries that Stone distributes in Southern California?
Zach: We are owned by the Stone Brewing Co., in collaboration with Maui Brewing Co., Essentially we are an arm of Stone Distribution. We currently have access to twenty of the brands they distribute throughout Southern California which make up the majority of their mainland portfolio. Some of the breweries Stone distributes on the mainland already have distribution through other companies on the island so obviously we are not able to bring them on. We will have a large access to the portfolios of the individual breweries. Currently we are sticking with a lot of the core and popular sellers but as we build the market we will be able to bring over more unique and special release beers. A couple of Stone’s special releases coming soon are 2/14/15 Enjoy By, Enjoy After, Smoked Porter With Vanilla Bean, and Delicious IPA.

How do you decide which beers from each brewery to bring over?
Andrew: Really we just pick the beers that we think will be a good fit. It has been great working with Maui Brew Co and their biggest supporters in the market are the one’s helping to drive this craft beer movement. What’s great about the craft beer industry is that it relies heavily on consumer demand.
Zach: To Andrew’s point and what I mentioned above, we decided to begin with what sells well in Southern California. As we expand we will happily expand the selections being offered if there is a demand.

Will we see specialty releases?
Zach: Of course! I’ll be featuring some of our special releases as they come available on our Instagram and Twitter feed. Looking for something in particular? Let your local retailer/bar/restaurant know. Most of our customers want to know there is a demand before bringing on something new so there is no better way than to just let them know what you want to see on their shelves or on tap!

Seasonal releases?
Zach: For sure!

What are some of the core beers from each brewery people can expect to find on a regular basis?
Andrew: This is kind of tough to say right now. We are really trying not to go too heavy with one brewery or another. The portfolio is so insane that is hard to leave a brewery out. I mean just look at the lineup! Of course, we’ll see Stone Brewing Co strong but that’s not to say you won’t see plenty of other options.

What is the most important part of the distribution process?
Zach: Number one is great people and number two is a strong process. We want to stand out to our customers as craft beer advocates and have a consistent process in place that will allow customers to rely on us as an exceptional distributor and partner with the highest quality beer available on the islands. We may currently be small and the new kids on the block on Maui but we come with the combined experience of Stone’s distribution company and believe we will prove we are the best in the business.

Are there plans for marketing and educational events around the breweries and beers?
Zach: We did a tasting at Whole Foods last weekend which was the first of it’s kind for Maui and we will continue to do more to educate the public on our new brands. Maui Brewing Co had done a great job with special events like beer dinners and tap takeovers and we want to continue in their footsteps.