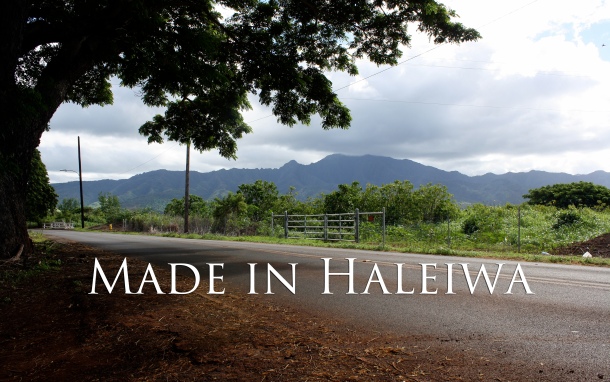 I’ll start off by saying this post isn’t about beer. Although my passion is beer I am always fascinated and intrigued by artisans who hand craft things, from furniture to spirits. I am also fiercely loyal to my hometown of the North Shore and when I learned about what Ken and Yumiko Hirata were crafting in a small building just down the street from where I went to elementary school, I had to check it out.

Hawaiian Shochu Company is one of only two shochu producers in the United States. Chances are you’ve never heard of shochu. It’s not very popular outside of Japan, where it is more commonly consumed than sake. The clear spirit is made from sweet potatoes and is distilled, unlike sake which is only brewed.

The Hirata’s have a very unique and inspiring story on the long journey they took to get their business up and running. The process of creating their shochu is very hands on and labor intensive. Currently they are only able to distill two batches a year yielding about 5,000 to 6,000 bottles. As they grow, Ken would like to add more distilling holding tanks to possibly increase their total output. 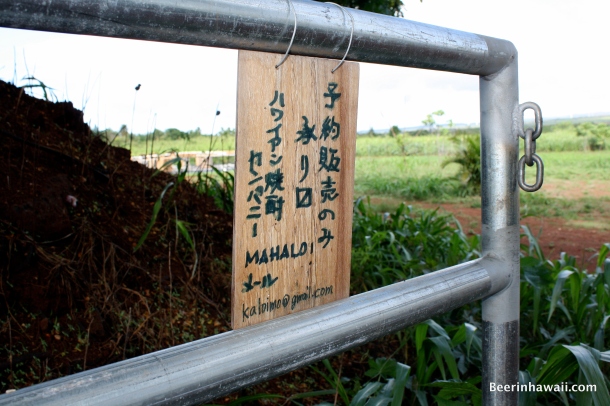 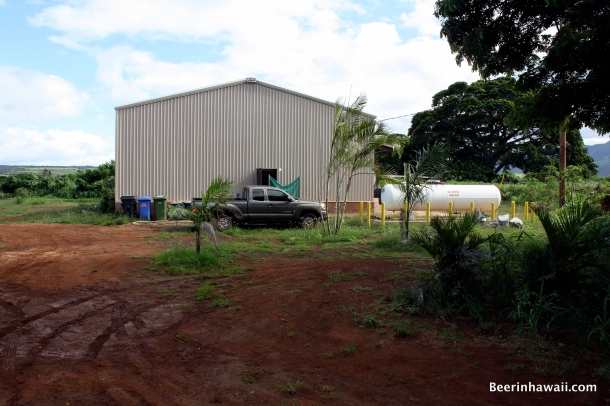 Ken and Yumiko Hirata are the sole two employees. They do everything with their two hands. 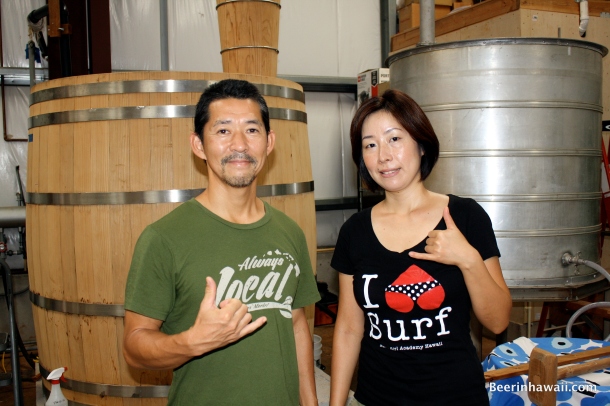 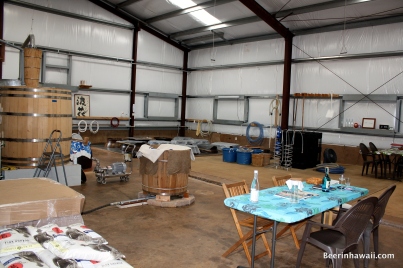 Fermentation vats in the distance 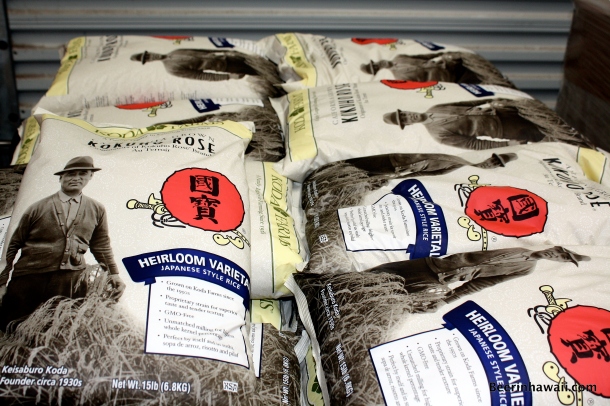 It all starts with rice. Ken uses a very high grade rice from California because he can’t find the same quality and quantity of rice grown in Hawaii. This rice is very expensive and is typically used for eating. The rice is used to make koji, a special enzyme that converts the starches of the sweet potato into sugar that can be fermented. 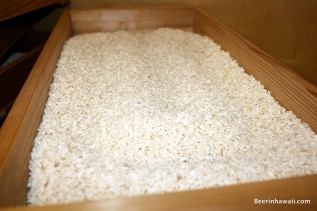 The Valley. Ken forms the rice into different patterns to make sure the temperature and humidity of the rice is just right 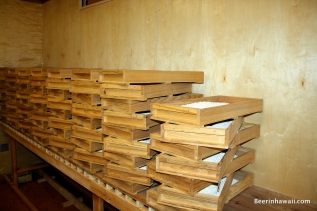 The rice lined boxes are arranged in different parts of the room and at various angles to allow air flow. 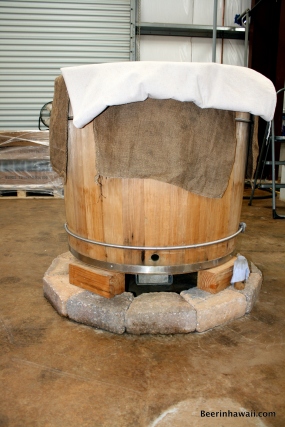 Rice is steamed, just like you would do at home.

A special room was built to allow the rice to grow koji. Koji, otherwise known as Aspergillus Oryzae, is a fascinating mold that needs very specific temperatures and humidity to grow. The room has various vents and ducts that allow the natural air in to cool the room. The rice is spread out onto wooden baskets and Ken uses his hands to feel the rice and check the progress. When I asked him if he used any special instruments to know how humid the room was or how dry the rice was getting he explained it’s all in the touch. It takes years of practice to know through touch how the rice is doing and if the koji spores are growing properly. Over the course of 3-4 days Ken moves the rice into different patterns depending on the progress. Here he demonstrates how to form the rice into the valley pattern. 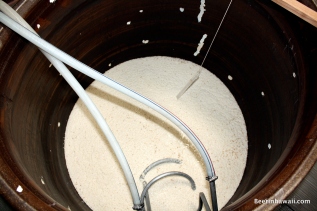 The Koji rice in a fermentation vat. At this point rice is mixed with water to create something almost like porridge. 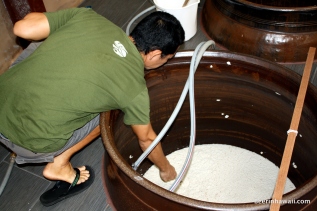 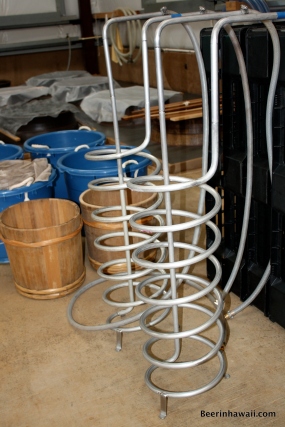 Homebrewers should be familiar with these. Big wort chillers are used to help regulate the temperature in the vats. Yeast is also pitched into the koji rice and allowed to grow before getting mixed in with the sweet potatoes.

Koji rice makes up about 18% of the final product. The other 82% comes from locally grown sweet potatoes. Most of Ken’s potatoes come from right on the North Shore, though he has used some grown on the Big Island. He says the potatoes grown in Hawaii are excellent because they have a lot of fermentable sugars while being mellow and subtle in taste. The sweet potatoes are steamed and mashed to make the starches accessible to the koji to convert into sugar. 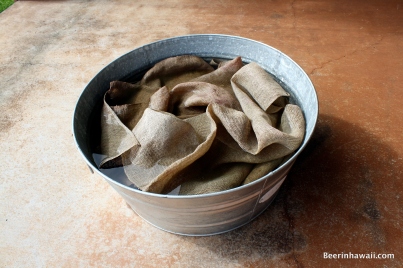 Burlap sacks are soaked in water to help with the steaming process.

The steaming chamber where the local sweet potatoes get a hot bath.

The sweet potatoes are so vibrantly purple they stain the wooden mash paddle used to smash them up after steaming.

Once the sweet potatoes are steamed and mashed they are put into the 100 year old ceramic fermentation vats that are partially buried in the ground. Ken received these hand crafted vats from his master teacher in Japan. The koji rice slurry is then mixed in with the sweet potatoes. A very unique biological process then takes place. The enzymes from the koji begin to break down the starches in the sweet potatoes and turn them into sugars. At the same time, the yeast is converting those sugars into alcohol. The bright purple mixture bubbles. The vats are closely monitored and left to ferment in the open with only metal screens and plastic tarps to cover the top. Beer brewers will note that this open fermentation could lead to exposure to various bacteria like lactobacillus and acetobacter. Ken explained that the pH of the mash was low enough to limit the growth of these organisms and they don’t effect the flavor as they would in beer. 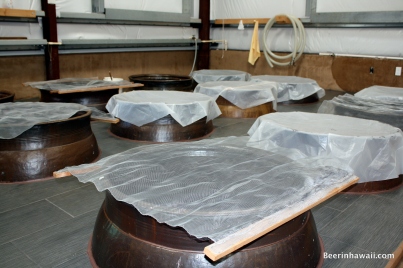 Fermentation vats. To control the temperature and air flow Ken covers the top with metal screens or plastic tarps.

Ken carefully watches the fermentation process for up to a week. Along the way he samples the mixture, but doesn’t use any special instruments to know when it is done and ready. Again, he relies on his taste, smell and experience to know when it is done and the sugars are fully converted. He explained that there is a very short time between when the mixture is done and when it starts to go bad, so timing is critical. Each vat is empty and placed into a still where the alcohol is extracted. It is only distilled once and comes out cloudy. Each batch is dumped into a storage tank. With only one tank Ken can only make 2 batches per year. The shochu sits and matures for up to 6 months. 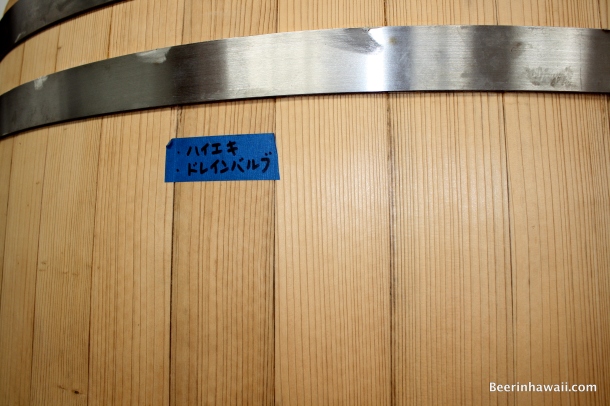 The final product is clear like vodka, but only around 30% alcohol. By itself it is slightly sweet with earthy notes (minerals) and very smooth. It’s a rather easy drinking spirit since it doesn’t have a strong flavor. I guess that is why it is so widely consumed in Japan. Ken explained that traditionally you mix shochu with water at different ratios. Some people like it with hot water, while other like to melt ice to make it cold. 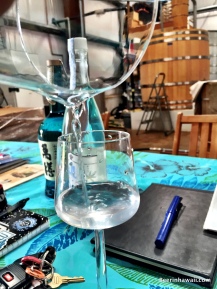 Shochu straight from the aging tank. This shochu is only a week or so old. It has a much harsher flavor than the aged version. 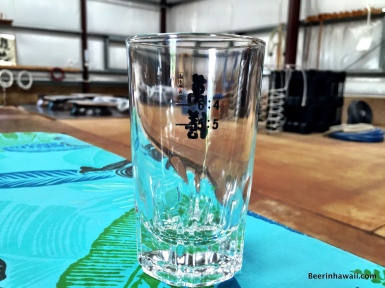 The proper Shochu glass. Notice the markings on it. They are guides to how much water to add.

The next batch will be ready in late March or early April and can only be purchased by visiting Hawaiian Shochu Company in Haleiwa. It’s worth making the drive out. Ken gives everyone a tour and will sit down and explain the whole process. It’s amazing to see all of the time and work that goes into making something that can so quickly be drank. Follow Hawaiian Shochu Company on Facebook to receive updates on the next batch. 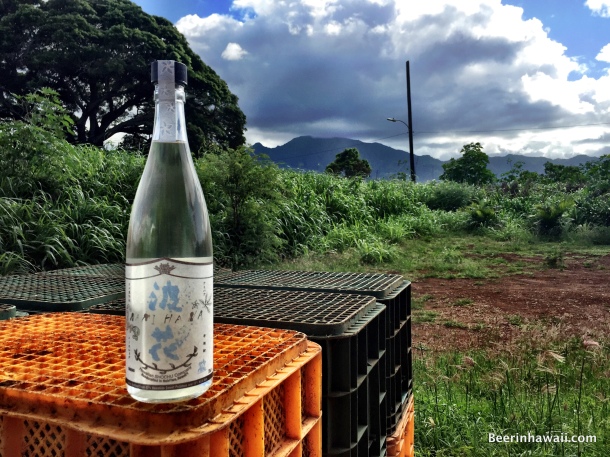 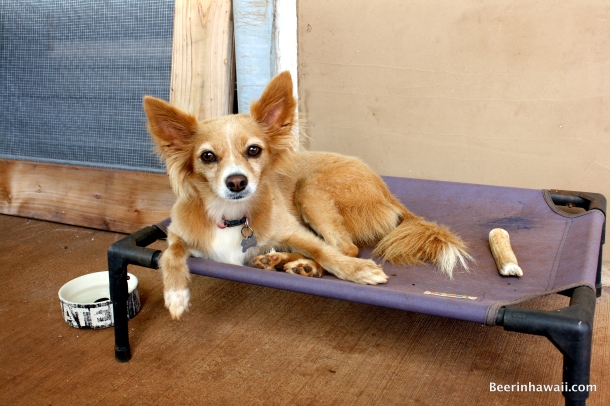 3 thoughts on “Made In Haleiwa – Hawaiian Shochu Company”