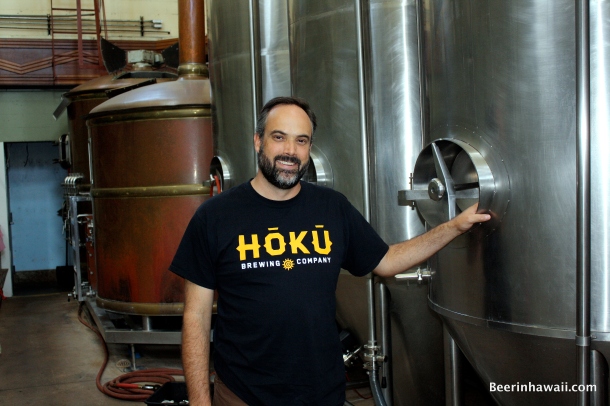 Hoku Brewing Company has quietly popped onto the Honolulu brewing scene releasing two beers in the past couple of months. Unlike other breweries that open up with multiple beers, Hoku has decided to start slow, releasing one beer at a time. At the helm of the new brewery is Adam Boggs, a Colorado native, who followed his brewing passion all the way to Hawaii.

Boggs, a former software engineer, interviewed for the Hoku job while still living in Colorado. He had been volunteering and working part time at various breweries in his home state hoping to eventually make the leap into professional brewing. Fate would have it that a job posting for a head brewers position in Hawaii became available and Boggs jumped at the opportunity. It also didn’t hurt that his girlfriend lived in Hawaii working as a marine biologist whom he frequently visited.

Boggs credits his 15 years of home brewing experience with helping him to land the job. A huge fan of stouts, he decided to bring his unconventional, but award winning barbecue stout to the interview. Obviously it was a hit because he’s now running the brewery.

It took months of cleaning and refurbishing the to get the brewery back up to speed. The former Aloha Beer brewery had been lying empty and unused since for over a year before he started and many parts needed to be replaced. As the sole brewer, Boggs had to troubleshoot various issues and fix the damaged equipment on his own. The process was long, slow and sometimes it took weeks to get new parts, but Boggs said taking everything apart and putting it back together helped him learn the entire system from the inside out.

Finally in early 2015 the brewery was ready to brew again. The decision was made to brew only one beer at a time and Boggs decided Hoku’s first release would be a stout. At first he wanted to go big and do an imperial, but scaled it back and finally settled on a lower ABV milk stout. His first brew as a professional brewer went well with little issues, but it was a very long day. In mid-April, Whale Spout Milk Stout was released. The name is inspired by his girlfriend who studies whales.

For their second release, Boggs wanted to do something completely different that would be perfect for the hot summers here in Hawaii. He knew that light lagers are incredibly popular, so why not do a take on a pre-prohibition lager that would be light and refreshing? Boggs says he plans on brewing traditional American brewpub style beers, but is always looking for a slight twist. Hoku’s pre-prohibition lager was recently released and Boggs hopes to eventually have about 5-6 rotating styles always available. Beers he mentioned that are in the plans are an Imperial Red, English Pale Ale, Dunkels and an IPA further down the line.

The plan for now is to release a new beer every 4-6 weeks. Boggs says customer feedback and response is very important and one of the best parts of his job is hanging at the bar and talking about the beer. A home brewer at heart, he hopes he can help the local community and says the support for other local breweries has been amazing.