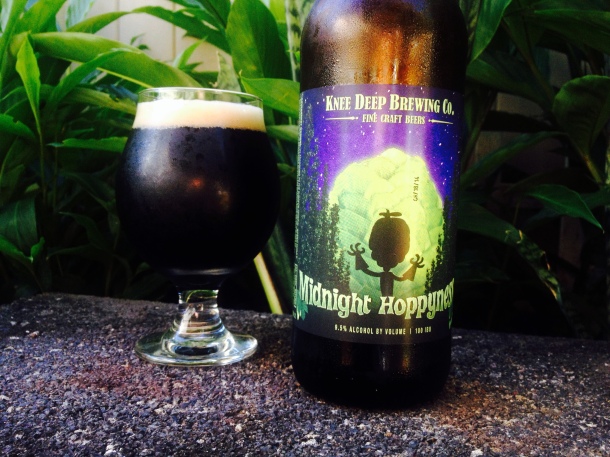 I have to admit, I’ve never been a huge fan of the Black IPA. I’ve tried dozens and keep trying new ones. I’m not sure why, because rarely do I find one that works. I guess I like the challenge of finding one that makes me rethink my personal tastes.

Why don’t I like most Black IPAs? Aside from wet hop beers, I think Black IPAs are one of the hardest beers to get a perfect balance. You’re taking two things, dark roasts and bold citrus hops, and smashing them together. These are two flavors that are not automatically complementary. They compete with each other and clash horribly when not done right. What you end up with is an overly roasted, burnt coffee taste followed by a tongue slashing bitterness with notes pine, citrus and tropical fruits. Not my idea of a good time.

Knee Deep Brewing Midnight Hoppyness is one of those few examples that achieve a great balance between these competing flavors (Firestone Walker’s Wookey Jack is another and my favorite example of the style.) I first had Midnight Hoppyness in a growler straight from the brewery. My wife’s family lives very close to the brewery and we visit often. Side note: Simtra straight from the brewery is something you should put on your beer bucket list.

Midnight Hoppyness strikes a perfect balance between dark roasts, a dry finish and the right blend of hop bitterness and flavor. I really think the key in making this and Wookey Jack such great beers is the addition of rye to the malt bill. The rye adds another layer of spice and complexity that helps compliment the dank, piney and resinous hoppiness. The deep roasted coffee, burnt bread and cocoa base is there, but it is rounded out and subdued by the rye. The hops are bold, but not overpowering. There is a great mix of earthy pine notes and bight citrus (the usually grapefruit, orange and slightly tropical.) They key is that everything is playing in the same ballpark and working together instead of completing individually for your attention.

The dry finish allows some acidic roasted coffee notes to linger along with a bit of dank piney hops. You may expect at 9.5% abv dark beer to have more sweetness, but they do a great job at keep it dry and which focuses your attention on the hops and roast. Like most of Knee Deep’s beers, you may not realize the strength of the beer until you’ve polished off the 22oz bottle in 15 minutes. Despite the high abv and 100 IBUs, Midnight Hoppyness is rather easy to drink. 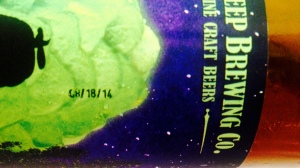 Also important to note, the bottles of Midnight Hoppyness currently available in Hawaii are extremely fresh. They were bottled in mid August. That means they made it from Auburn, CA, all the way to Hawaii in about 3 weeks. For big, bold hoppy beers, you’re not going to get much fresher than that living in Hawaii (unless you buy from one of our awesome local breweries.) I’d suggest if you want to try this beer go out and find it now. Sure, this beer will age fine, but you really want to experience the hoppiness as bright and fresh as possible.