Lanikai Brewing Company is releasing a 3X IPA (yes triple) tomorrow as their next Brewer’s Series beer. This is the third triple IPA released in Hawaii in the last 2 months and it’s exciting to see how each one is so very different (Maui Brewing Company and Honolulu Beerworks both recently released their own versions.)

As usual, Lanikai has thrown in a fun little twist with this triple by adding freshly picked Jabong fruit (aka pomelo). Jabong trees are abundant in Hawaii, but the fruit isn’t something most people pick and eat. The extra large grapefruit like citrus has a thick skin and a hell of a lot of pith. The meat is pulpy and taste something like a watery grapefruit.

Head brewer and owner Steve Haumschild explains that they picked “a ton” of fruit from a tree in Kaneohe and spent close to 30 hours processing the fruit. Both the zest and juice from the fruit was used in the beer. The juice needed to be filtered and strained multiple times and hours were spent pealing all of the thick pith off the fruit.

Here’s the official beer description from Lanikai Brewing:  “Jabong (grapefruit), ripe melon, lemon-citrus aroma warms the nose. Juicy burst of Jabong/lemon/lime/orange flavors that transition to a slight “grand mariner” like taste as the beer opens up. Strong but balanced bittering and aromatic fruity hops lead to a dry finish that fades to warmth. Light Gold with orange highlights and a beautiful creamy head that lingers. Total ass-kicker” 10.8 ABV – 90 IBU

The 3X IPA will be available tomorrow at the Lanikai Brewing tasting room in Kailua. 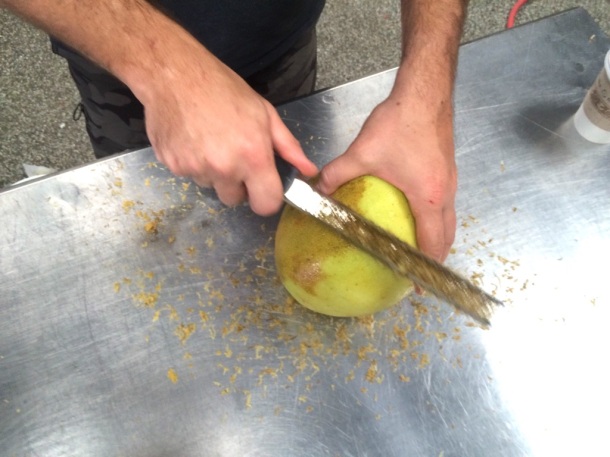